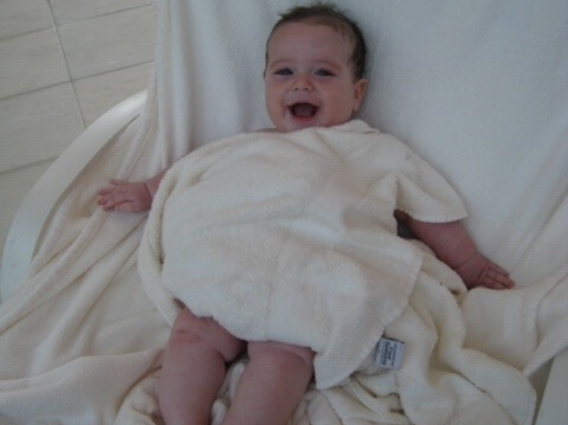 When you are a second time parent, you suspect you can be a bit more laid back than with your first child;  at least I did. I wasn’t prepared for what happened when my son was six weeks old. I was sleep deprived, recovering from having a baby, tending to my 3 year old as well as my newborn. I thought his illness was “just a cold” which explained why he was breathing so heavily.  Boy, was I wrong.  One night,  just when I thought I had everything under control, my husband came home from work. He was alarmed. He noticed my son didn’t look right. We did everything we could think of and it didn’t seem to make much of a difference. I made the mistake of driving him to urgent care instead of calling an ambulance. The person at the front desk took one look at him and rushed him into the treatment room.  That moment started a many-month long flurry of hospital admits, visits, doctor’s appointments, tears and anxiety.

We were told different things by each doctor and every hospital had a different approach to treating him. No matter what we tried, a week or two later we were back in the ER. We spent months thinking that the only option was to basically sequester our family into a bubble to prevent my son from catching a cold or getting any sort of illness that could complicate his breathing.  We pulled my daughter out of preschool and isolated ourselves until my son was older.   We thought we could lose our son if we took any chances proceeding with life as usual.  We worried that if we actually slept, we may not notice that our son was struggling to breathe. We felt like our whole world was crumbling and we felt powerless.

In the midst of those dark days, we found some light that eventually turned into sunshine. A family friend told us that we needed to get my son checked out at Children’s Hospital Los Angeles.  Luckily they agreed to see us. We saw Dr. Keens in the Pulmonary Clinic. He embarked on a series of tests, including a sweat test to see if our son had Cystic Fibrosis.  This is when we realized how serious this “cold” had truly become.  We got lucky. He did not test positive for CF or any of the other really serious other possible causes for his problem. Dr. Keens ultimately figured it out and gave us a very manageable way to prevent the breathing issues from coming back and addressing them from home before they got bad. It almost seemed too simple. How could nobody else have figured this out?

Theo started getting better. First his troubles with breathing became less frequent and eventually they went away (at least mostly).  Our family could start to move on and heal from the terrible trauma that we had endured. We felt guilty every time that we went to CHLA. Our son had something that was treatable, our child had a future. We couldn’t have been more grateful.  It was at this time, that we knew that there was a reason that all of this was happening to our family. We had been given the gift of my son’s life and it was too precious to not find a way to give back. This is why we helped start the Change 4 Children’s Foundation.  We wanted to give back to CHLA and other children’s hospitals around the county to show our appreciation.  Yes, we could have made a monetary donation and we did. However, we figured that the amount we could donate by engaging the entire community would be much more powerful. We also hoped to raise awareness in the community for this truly amazing place and other children’s hospitals around the United States. Just as important, we wanted to give our kids (and others in the community) a way to participate and learn that they too can do philanthropy. We believe that small change adds up to great things.

The Change 4 Children’s Foundation is a registered 501(c)(3) organization focused on funding child life services and innovation initiatives at Children’s Hospitals across the United States. The primary mission of the Foundation is to empower young people to be philanthropic within their own communities and to focus on improving the patient experience for their peers in need.

Go to smile.amazon.com every time you order Designate Change4Children's as your "charity".